Last week my friends Edwin and Aline came to visit us in Tromsø. I studied meteorology together with Aline in Wageningen, but we hadn’t seen each other for more than 7 years! I was a bit worried about the weather during their visit, as in the week before they arrived we had several episodes of mild weather (+5 degrees) and lots and lots of rain. There were huge puddles and flooded roads everywhere. Then it turned cold again, dropping from +5 to -5 within a day. This caused lots of problems: the flooded roads froze over, challenging the road services to get rid of thick layers of ice. Our car got in trouble too: the back wheels were standing in a puddle, and when it froze over, the wheels froze into the puddle and it was impossible to move the car! The doors kept freezing as well, locking me inside the car, having to call Paul on his mobile so he could rescue me by opening the door from the outside, and pouring hot water over the tires. Crazy day!

But luckily for Edwin and Aline, the weather started improving as soon as they arrived. I was working for the first couple of days, but I had the weekend off so we could go sightseeing together. Saturday was a very sunny day, and our first stop was Håkøya. Edwin is a keen photographer as well, so it was fun to spend some time taking photos of the beach and the sea ice. I have never seen so much sea ice as that weekend! It’s not uncommon for the sea to freeze at the shallow beach at Håkøya, but this time there was ice cover as far as I could see. I found it a bit puzzling at first, as it had been so warm for the past week. But I asked my personal oceanographer and the explanation is that all the rain that fell on the sea stays at the surface and freezes easily.

When we walked back to the car, parked next to the bridge, we noticed a horrible traffic warden writing us a fine. NOOOO…. We quickly walked over to him to find out what was going on. Turns out you can’t park next to the bridge, even though there is lots of space there. Yes, there’s a sign but I hadn’t realised that it applied to a 100-200m stretch of road, not just the space right next to the bridge. According to the guy, you can happily park on the opposite side, where you actually park on the road and block the way, but hey – there is no sign there. I’ll never understand the logics of parking fines, especially in the middle of nowhere where there’s plenty of space. But he let us go with a warning, so we didn’t argue much more 😉

We drove to Grøtfjord and went for a walk on the beach. It was very windy there, and COLD. We didn’t last very long.

Our goal for the day was Brosmetinden, but when we got to the parking lot we got doubts when we saw how strong the wind was, and how much the snow was blowing around – it looked like the North Pole. We wrapped up warm, and gave it a try, thinking that we could always turn back if it got too tough.

Once we started walking, we found that it didn’t actually feel that cold, and the wind wasn’t always strong, it came in short bursts. It was beautiful to see the snow blowing around, even if it wasn’t always very comfortable 😉

There were quite a few people on snow shoes, something I also noticed on my last visit. Perhaps the snow shoe rental people advise their customers to go there? (You’ll very rarely see a Norwegian on snow shoes!). I actually walked up in boots this time, the snow was so wind blown that it was almost like walking on concrete. We decided to continue to the top, which was definitely worth it… 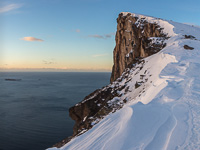 We only had a short break on the top to take some photos, the wind was so loud here that it hurt our ears! The views were spectacular though…

I took another panorama, similar to one I took last time (see here). If you compare the two, you can see how much little snow there was at the coast last weekend…

We made our way back to the car with a backdrop of a colourful sunset. Another great trip, Brosmetinden is becoming my favourite mountain 🙂

The next day Paul joined us, and we drove to Ringvassøya. All the rain/wind of the previous week, followed by cold weather, has resulted in some skateable lakes – too bad we didn’t bring our skates! These photos are taken at a lake with the strange name Peder Sørensenvatnet – wonder what this Peder Sørensen did to have the lake named after him – or perhaps he just owns the land? 😀

The bubbles in the ice were fantastic 🙂 we had another stop at a little island near Skarsfjord, but it got so cold when the sun disappeared behind the mountains that we decided to drive back to Aunegården for cake and hot chocolate 🙂

After our cafe stop, we walked around the centre a bit. It’s beautiful at dusk, when Tromsdalstinden is almost glowing in the last bit of twilight.

It was a great weekend, and on Sunday evening even the northern lights made a spectacular appearance. I was very tired and decided to stay home, but Edwin and Aline stayed out for hours and came back with fantastic photos. I’m glad they got to see Tromsø at its best 🙂

2 thoughts on “Sightseeing on Kvaløya and Ringvassøya”