Avast, me hearties! I’m finally back in Tromsø after spending three fair weeks aboard the fine ship Lance, magically including talk like a pirate day! The Lance is a considerably more piratey sort of vessel than those that I’ve been working on recently. It smells of oil and drunken sailors as opposed to over zealously applied cleaning products and it has a gutsy old engine that hurts your ear drums and makes the whole ship vibrate when its going full blast. It even has a crows nest at the top of a mast on the bow which is reached by a perilous climb up an ice-encrusted rope ladder which was great fun (see pics below). Lance is a good old ship with a great crew, and I think I prefer working on old ships like this one than bigger or more modern research vessels.

For the majority of the trip we had unbroken grey skies and fog. A huge contrast to the weather I experienced when I was in the same area (Fram Strait) earlier this year. Then we had blue skies almost every day! Much of the difference is due to seasonal variations in ice cover: In March the sea over the Northern part of East Greenland Shelf is completely covered, so the relatively warm water underneath can’t easily evaporate into the atmosphere. In fact where there are small openings the sea steams like a bath! In September the sea ice melts back to its minimum and a lot more of the relatively warm surface water can evaporate to form fog and spoil the visibility! I won’t complain though – it’s very atmospheric to stand on the bow of a ship slipping quietly through the ice in fog, which deadens the sound of the water and distant engine. Towards the end of the trip the fog occasionally lifted and there were often ‘fog bows’ when this happened. Fog bows are colourless rainbows which occur when water droplets in the air are too small to cause much refraction. 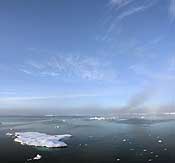 There were only about 10 scientists on the ship this time – half of us were oceanographers studying the East Greenland Current and any ice that melts into it and half of us were sea ice scientists studying the ice. Sea ice scientists get to spend a lot of time walking about on the ice they study (they go drilling holes in it, measuring how much snow is on top, collecting samples etc.) ,while us poor oceanographers have to work hard to find excuses to get off the ship. In the winter when there is a lot of ice and many of the floes are large and thick the ship can simply come alongside a flow and lower a gangplank to allow people off. When the floes are smaller and melting though it’s safer to go in a rubber dinghy, so that if anything happens people can be quickly and easily collected up. It’s good fun to go buzzing around in an inflatable too!

Here’s a couple of photos I took in the evenings on days when the fog lifted a bit. Even though there were quite large areas of open water between the ice there were only ever small ripples on the surface.

While the ship stays in one place and the sea ice scientists go out on to the ice the oceanographers get a bit of break. Generally we spend time looking at our data and checking instruments (these trips are typically quite hard work), but on this occasion things were going well and I decided to spend a bit of time messing about. So…. I cut a hole in the side of a plastic fish crate and glued the front of a clear plastic CD box over it with some silicon sealant. Then I went out on to the ice, put my camera in the fish crate and put it over the side of the ice flow. My camera got a frog’s eye view of the Lance! I got the idea from Practical Photography magazine who had an article where a guy used a small fish tank to take pictures of swans in a pond.

Later in the cruise Lance headed into the middle of the East Greenland Current to deploy a mooring to measure the currents. The ice in the center of the East Greenland Current can be very thick and closely packed as it is comes straight out of the Arctic Ocean, and to cut a long story short we got stuck! In the end we were only stuck for about 14 hours, but we didn’t know how long we would be there at the time! We tried all kind of things to get loose, from thrashing around with the engines, to trying to dynamite the ice around the bow and finally swinging some train wheels around with the crane to try and rock the ship. None of these schemes were very successful and we simply had to wait until the ice loosened up a bit and allowed us to sneak out in the early morning darkness. In the pictures below you can see: An area of water where the ship was that froze over again; drilling a hole to put dynamite in the ice near the bow and then poking the dynamite down the hole with a long bit of bamboo; and finally heading out into open water.

Close to Greenland later in the trip we found another hole in the fog! Here you can see some of the weird shapes the ice ends up in as it
melts below the water line and a whole lot of melt ponds which form on top of melting ice. I have a suspicion that the hole in the first photo may have initially been a melt pond – but I don’t know.

We also saw a few icebergs close to Greenland. These are chunks of the Greenland Ice Sheet or Greenlandic glaciers that break off and drift out to sea. The water is only about 50 m deep in this photo and the iceberg has probably run around. Grounded icebergs are interesting to oceanographers because they tend to pin the sea ice around them in place and protect it from breaking up and drifting away and melting – but not in this one!

After leaving Greenland we headed back out towards Svalbard, and then south back to Tromso. I don’t have any pictures of this as we had to work quite hard and were then faced with a bit of a storm. I was hiding in my cabin being sea-sick an getting some rest! The last pictures are from the very end of the trip as the ship was passing through the beautiful archipelago that blissfully protects the coast of Northern Norway from the evil of big waves.

Those of you in the UK may soon get a chance to see Lance on the TV. The BBC used Lance to make a program in a series called BBC Oceans, and from their website it looks like the ship might feature quite prominently.

The sea ice scientists, and to some extent the biologists are interested to know how much light penetrates though the ice to reach the water below (sunlight light warms up the ice and the water underneath and also allows algae to grow there). How do they measure how much light gets through the ice? Simple: send a diver with a light meter underneath! The first two pictures show a military diver from the crew, getting ready to enter the icy (literally) waters, while the last two pictures (taken by the divers) show the wonderful world underneath. The water temperature is roughly -2, while the air temperature is about -10.

The 17th of May is the national day in Norway and it seems to be a day that people really look forward to. Everybody has the day off work and lots of parading and flag waving occurs. I’m not normally a fan of this kind of stuff, but I have to admit I quite enjoyed it. On the ship we celebrated with various ‘village-fete’ type games on the ice. The first picture shows two of the guys from the crew analysing the aftermath of a fiercely contested nail hammering competition! The last picture shows a pølse (hot dog) and ice cream stand that was erected in the Helicopter hanger after the silliness on the ice subsided.