As a preparation for our planned hut-to-hut ski trip for Easter, we decided to take a short trip to a cabin called Blåkollkoia. We’ve visited the cabin once, but that time we only ate lunch there. It’s a very small cabin with only 4 beds, so we were always a bit nervous planning a trip here, as it can easily fill up (you can’t reserve these huts). After a lot of bad weather, we thought surely nobody else had planned a trip here on a Friday evening…

We left after work, and it started getting dark by the time we left the parking lot in Tønsvik. At the same time, a couple of snowscooters took the same route – they belonged to a rescue organization and they wanted to practice getting lost in bad weather. However, the weather improved drastically that evening – until the skies were clear and beautiful northern lights were dancing above – which made us regret not taking a tripod! We were very grateful for the scooters who drove almost all the way to the hut, leaving an easy to follow track for us. They stopped to talk to us on their way back, and told us they saw ski tracks around the cabin and that there was probably one other person there. No problem, we thought 😉

We arrived at the cabin just before 22:00, and noticed 2 pairs of ski’s outside the door. No problem, there are 4 beds… but when we opened the door, we had a bit of a shock, as we were greeted by FIVE pairs of eyes – all looking just as shocked as us 😀 Three sneaky Belgiums had come on snowshoes… Oh well, there was 1 extra mattress and 2 of the Belgians were willing to share a bunk. After a delicious cheese fondue dinner we tried to sleep sharing a single mattress which was placed half under the sink… I had just settled in my sleeping bag when I heard voices outside… I poked Paul, who refused to believe me. But soon the voices were right outside the door and there was no doubt that more company was on the way 😀

Another couple arrived, and sadly the only place left was underneath the table on a woolen blanket. The next morning we all had breakfast together and laughed a lot about the record number of people in this tiny cabin! Outside, the sun was shining and although some kind of animal had stolen the lunch packet of one of the women in the hut, everybody was in a good mood. Our only plan for the day was skiing back to Tønsvik, so we took it easy and left the cabin around 10:30.

You first have to make your way down to the river and cross it by a narrow wooden bridge. After that you climb up to the wide plateau, which was beautiful in the sunshine 🙂

We really enjoyed the blue skies and great views, and lots of unspoiled snow.

We had a nice lunch break on the plateau, before descending down through the forest. It took us about 3 hours to get back to the car. Here’s a map and a height profile of our trip… 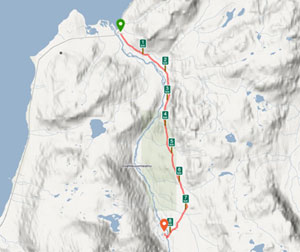 It was a fun trip, but I think we’ll bring a sleeping mat next time – just in case 😉 We didn’t sleep very well on the floor and having stiff muscles doesn’t help much the next day. It was good to have a “practice run” though, and find out how to improve things before our longer trip (next week!).