Last week I spent a couple of days in Dhaka, the capital city of Bangladesh. The ministery of Foreign Affairs in Norway pays for a project where my institute helps the Bangladesh Meteorological Department. This project has been going for 4-5 years already, and I have recently been asked to join.

It was my first visit to Asia, and the traffic chaos was overwhelming! It can take anything from 20 minutes to 1.5 hours to reach the department from our hotel. I couldn’t get my head around the population either, Dhaka is the 11th city in the world with 12 million inhabitants, and the Greater Dhaka Area has 17 million people – that’s more than the Netherlands (which is already the most densely populated country in Europe apart from Malta/Vatican City/Monaco/San Marino which are so small they don’t count 😛 ) 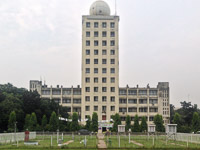 Bangladesh is a developing country and a lot is still done by hand. I visited the weather office, where weather maps and weather forecasts were done on paper. 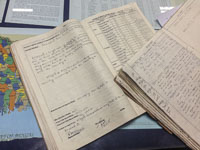 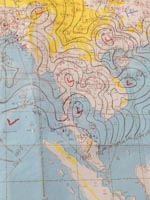 Yet things are slowly changing, and some of the Norwegian products for visualising meteorological data are now in use in Bangladesh. Very nice to see! 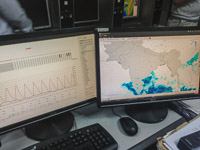 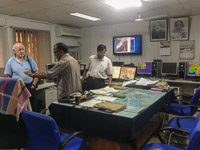 We had lunch with the project group. The flags that were decorating the building on the outside and the inside were showing the names and faces of people who were running for union elections 🙂

On our last day, there was a strike and we were told it was safer for us to stay at the hotel. So instead, some of the project members came to our hotel where we had our final meeting.

We were staying at a very posh hotel, and my room was on the 22nd floor! I took these two photos from my room…

Around sunset, I took some photos from the balcony on the 23rd floor…

We only had 3 days in Dhaka (it should have been 4, but we lost one in Istanbul), so time flew by. There was not much time for sightseeing, and even if there had been – we had been advised by the Norwegian embassy to stay in the hotel and not venture out in the city by ourselves, for security reasons. If everything goes to plan, I will become project leader for this project in 2016. That means I will travel there once a year, and hopefully on one of those trips I’ll have the chance to discover more of the country!