In May we spent two weeks in North Wales. Paul’s mum is from there, so it’s not a new area for us – it was my third visit there, but I never get bored of this area. Just before the long journey from London to Wales, I picked up my new camera – a Canon EOS 6D, I’ve finally taken the step to full-frame 🙂

One of our first trips was to Porthmadog by train. From there it’s a short distance to Borth-y-Gest, a very pretty village around a bay that falls completely dry at low tide. Time to test my camera 🙂

Later that day we went for our usual walk on the beach at Llandanwg. Heavy showers had been passing all day, and the skies were very threatening while we were on the beach…

In the end we had to run for cover, and we found shelter underneath the entrance to the small church of St Tanwg. This very old church used to be in the fields, but is now surrounded by dunes. For some time it was even buried in sand, and only dug out once a year for mass. At the moment it’s in more regular use, but a lot of the gravestones are buried in the dunes. A fascinating place! And it was even more special when the rain shower passed, and a bright double rainbow spanned over the church – beautiful 🙂 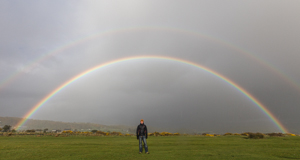 We continued our walk on the beach, with beautiful clouds…

Around sunset the light was very yellow and we walked back over the tidal flats next to the river, together with a lot of sheep and their lambs 🙂

Another beach that we like to visit is the huge beach near Harlech. You can walk there from Llandanwg, but this time we drove to the parking lot at the golf course, as we wanted to reach the far end – about 5 km one way. Paul took his kite, and took aerial photos of the beach.

A pretty cumulonimbus on the horizon, making a meteorologist very happy 😉

The beach at the far end is HUGE!

We walked back at sunset, with the clouds colouring pink and flocks of birds flying around us – so beautiful.

We didn’t meet anyone else during our walk, except for this one guy when we were almost back.

Here are some photos that Paul took with his kite: 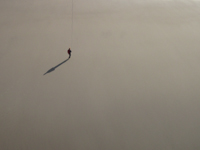 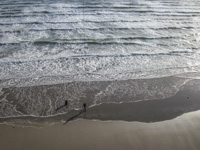 The next day we decided to go for a long walk: the northern section of the Ardudwy Way. We did it in the opposite direction as described on the website, as it meant we could take a train to Llandecwyn in the morning, and walk back to Llandanwg. The weather wasn’t perfect, it was overcast with a few drops of rain, and quite cold – but we still enjoyed the hike. Near the start of the hike we found this really cute little lamb…

The church of Llandecwyn has a spectacular view!

We passed through a mossy forest, and came across this lonely farmhouse high in the hills.

After that we left all houses and roads behind, though we did follow a Bronze Age trackway (3000-4000 years old) through the hills. The highlight of the trip was Bryn Cader Faner, a Bronze Age burial site or cairn circle. Quite impressive!

Paul flew his kite for a while, but the cairn circle just looks like a pile of rocks from above 😉 We continued our way back to Llandanwg, it took us about 7 hours to walk the 20 km – a long day! 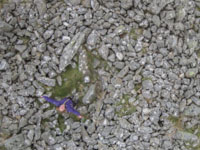 I had sore muscles after our hike, but I couldn’t stay inside when this double rainbow appeared over the Moelfre in the evening… followed by an amazing sunset 🙂 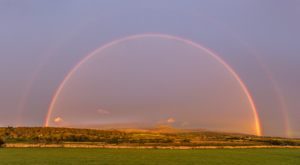 The next day we took it easy and we went on a day trip to Aberystwyth (by car). We hadn’t been there before, but it’s a very pretty and pleasant town. Full of students, which is quite a change from other parts of North Wales where the population consists of lots of pensioners 😉

Our real destination for the day was the submerged forest at the beach near Borth. This “forest” (collection of tree trunks) is between 4500 and 6000 years old, and only visible at low tide. There doesn’t seem to be a clear reason why this forest became submerged, but there isn’t much information available. It’s not indicated on any maps, and only mentioned in one sentence at Ynyslas Nature Reserve (though the information centre there was closed by the time we arrived, perhaps they had more information inside). Anyway, well worth a visit!

The tree trunks were beautiful, and you could see all the tree rings on them. They still feel like wood, it’s hard to believe they are thousands of years old!

Paul had his kite with him again, and he took some photos of the forest from above…. 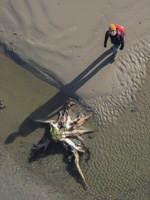 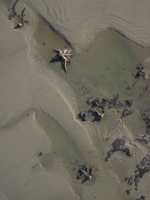 When our muscles had rested long enough, we decided to climb Rhinog Fawr, the highest of the two neighbouring Rhinog peaks. We parked at a farm next to where the so-called Roman Steps start. I have seen this name on a map for many years now, and it always intrigued me. Why were the Romans building steps in the mountains? It was almost disappointing to learn the truth: the path has nothing to do with the Romans, it was a medieval pack-horse trail. You can follow it all the way to the pass where we turned off to climb to the top of Rhinog Fawr. Impressive! We got a bit lost here, when you get closer to the top there are many paths to follow.

The weather was cloudy and we got a few drops of rain while on top. Luckily someone had built a shelter so we could enjoy our lunch out of the wind!

A cute little bridge on our way back to the car. The last part of the path goes through a mossy forest.

As usual, the weather cleared up in the evening and we enjoyed another fantastic sunset from the beach…

The next day we decided to walk the southern section of Ardudwy Way. Paul’s parents decided to join for the first part of the hike, as the weather was very nice. We started from Barmouth, with great views from the broom-covered hills to the coast.

We passed lots of ruined farmhouses, and a couple of lived-in ones 🙂

The sunshine disappeared which made it a lot chillier, but the views were still great

Paul’s parents were curious to see Cerrig Arthur, a small stone circle that is quite well known around Barmouth. We almost didn’t find it though, as it’s just 3 rocks in the middle of a field… a bit of a anticlimax really, especially when we also found that we had a long climb ahead of us and our views were taken away by fog and light rain rolling in. By this time it was also too late for Paul’s parents to turn around as they had planned, so we decided to all walk to Tal Y Bont where we had left one car in the parking lot.

The last part of the hike is really pretty, it follows a river surrounded by a mossy forest. The forest was full of bluebells and other flowers, very pretty!

We made it back to the car just before it got dark. It all worked out nicely, as we were able to order pizza’s in Tal Y Bont, drive back to Barmouth to pick up the other car, and pick up the pizza’s on our way home 🙂

Our holiday in Wales was coming to an end, and one place I was still keen to visit was Ynys Llanddwyn. This is a tidal island (only becoming an island at the highest of tides) on the coast of Anglesey. I had seen lots of beautiful photos taken here, and I was very excited about visiting 🙂 We parked at Newborough Forest, and walked along the beach to Ynys Llanddwyn…

It was a beautiful day: warm and sunny! The island was covered in lots and lots of flowers… and there were birds everywhere.

I took a lot of photos and I really enjoyed our visit. There are two towers here, one is an old beacon called Twr Back, and the other a lighthouse called Twr Mawr. There are also some lighthouse cottages, a cross, a Celtic cross, the ruin of a church… plenty of things to see!

And there were horses!

Such a beautiful place…

A few days later our holiday was coming to an end… On the last day, the weather was perfect and we went for one last walk to Harlech beach – I think you can understand it was hard to leave views like this… what a perfect little holiday 🙂

4 thoughts on “Two Weeks in Wales”