Last week we spent three days on the island of Sørøya. We were lucky enough to borrow our friend Suse’s Starmobil, a Volkswagen Transporter campervan. It took about 8 hours to reach the island, we took 3 ferries on the way! Here’s a map of our journey, click to enlarge… 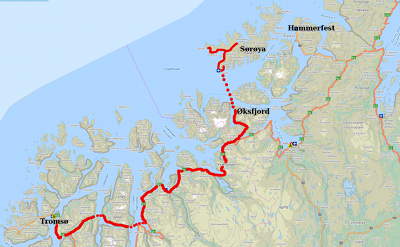 This is where we spent our first night on the island. The sunset was beautiful, but it wasn’t very warm so we enjoyed a dinner inside the car. What a luxury to have a roof above your head while camping!

The next morning, I woke up before Paul and I spent some time looking for cloudberries. These berries only grow in Arctic regions, but they can’t be farmed. They look a bit like raspberries, but they are orange when they are ripe. People are quite competitive about picking them! I only found a couple of ripe ones, but they were SO tasty! I swear it’s like a tiny bite of a creamy cheesecake when you find a good one… 😀

Close to Hasvik, we stopped to look at the stockfish racks. Usually the fish are removed from the racks before the summer, but for some reason there was still quite a lot on those racks. It’s creepy to walk underneath so many dead, headless fish – I’m always paranoid a bit will fall off and end up in my hair 😉

We walked to a beach near Hasvik, where there was an abandoned Dutch whaling station according to our map. All we found were some old, rusty bits of metal, but it was a nice beach nonetheless! Lots of stuff washes up on the beaches on Sørøya, so beach combing is great fun. The fishing balls and rings often show where they are from, which is quite interesting. We found Norwegian, Danish, Icelandic and Spanish ones! We even found an Icelandic milk carton on the beach… long journey 😀

After our hike we continued along the road towards Breivikbotn. This stretch of the road is beautiful, and there were lots of flowers growing next to the road. The sun came out, and we enjoyed a nice coffee break next to the road. Yes, I could get used to the campervan lifestyle 🙂

Breivikbotn is a small fishing village, which also has a small shop that happened to open for 2 hours on Sunday evening exactly while we were there – ice cream time 🙂

A bit further along the road we stopped at Breivik, a tiny village with a couple of really nice sandy beaches. The weather was really improving and it was so beautiful there in the sunshine…

We decided to drive to the end of the road at Sørvær. Another very pretty fishing village, I took lots of photos there!

It was such a beautiful calm evening, with perfect reflections…

A lot of fishing boats… there was also a filleting factory here, and a Swedish company taking tourists fishing. Sørøya is well known for very big fish, and this attracts fishing enthusiasts from far away.

There was also a tiny petrol “station”… and some accommodation with original decorations next to the doors.

While I was taking photos, Paul was trying his luck fishing from the shore. No luck… He was quite frustrated not to have his boat with him, but it was hard to fit the boat and the engine in the campervan together with all our other stuff.

Later in the evening we drove the dirt road up towards Sluskfjellet. We found a great parking place high up, overlooking the ocean and the Åfjord lake which (just like Loch Ness) is rumored to have a monster in it – it was even indicated on our hiking map with a symbol of a monster :D. Unfortunately it was hiding from us 😉 From the parking place, it was a short hike to the top of Sluskfjellet where Norway’s northernmost weather radar is placed. Of course I had to visit 🙂 You can see a nice slide show of the building of the radar here.

The next morning the car was shaking like crazy – it was really windy with strong gusts. We skipped breakfast and drove to the end of the dirt road, towards Dønnesfjord. A really beautiful road!

The road ends in a parking place from where most people take boats across to a peninsula with several houses/cabins on it. You can also walk there, but it’s quite a long way so we just turned around and drove back. We stopped at a lake full of green plants, very beautiful! Paul flew his kite for a while, but the wind was so strong that it was very hard to get it back down.

In the afternoon we hiked to Nordsandfjorden, a beach about 5 km from the road. Luckily it was not so windy here, and warm enough to walk in a tshirt 🙂 These photos are taken from the place where you first spot the beach (and nature reserve) down below – so beautiful!!

We didn’t see anyone all day and had this amazing beach all to ourselves… it was full of driftwood so we made a campfire and had some dinner. We came to this beach to visit the “Nordsandfjordhula”, a cave where 133 people hid from the Germans during the second world war. The cave was signposted all the way from the road, but we still found it hard to find. The information signs fail to mention that you can’t reach the cave at high tide, and of course we happened to be there at high water… so the only thing we could do was wait until the water came down.

The information signs also says it’s an easy walk, which is true until you get to the beach. The last part to the cave involves climbing over extremely slippery rocks full of seaweed and algae. I fell down once, didn’t really hurt myself but I was all covered in algae (my hiking boots still smell terrible!). The cave is worth it though, it’s very big. There is a central part near the entrance, and then you get to a T split with two tunnels each about 100 m long. Quite impressive, it’s a cold and narrow cave with water dripping from all walls and ceiling. Can’t imagine hiding here for a long time! You can still see some items that were left behind, like some shoes, cooking supplies, glasses, fireplaces, etc. They didn’t actually stay in the cave for very long, somebody had betrayed them and the Germans came with a ship to get them. See here for more information.

We started walking back very late, it was about midnight. Paul had found a whale skeleton on the beach and was very keen to bring a piece home. We used a fishing net on the beach to tie it to his bag, and he managed to get it back to the car – a 5km hike crossing a hill! For me it was a relaxing experience, as he for once was walking slower than me 😉

On our last day on Sørøya we woke up to rain. We stayed at a beach with some very basic camping facilities (an outside cold water shower and a toilet). Paul was keen to use the shower, an experience he called “character-building” :D. It cleared up later in the day, and we visited another (smaller) cave near Hasvik. In the evening we took the ferry back to Øksfjorden, and we decided to drive back to Tromsø that night, even though it meant taking the long way back as it was too late to catch the Lyngen ferries. It turned out to be the most magical night ever, we just had to stop in Sørkjosen to enjoy the view of the calm fjord at sunset, with fog rolling in…

Paul tried his luck fishing from a small beach, but only caught a few very small fish. What a fishing spot though 🙂 we also saw some dolphins, or perhaps they were Minke whales.

Eventually we were surrounded by fog. Unfortunately my camera battery was almost empty and it was very hard to keep taking photos – quite frustrating when it’s such a beautiful evening 😉

The drive along the Lyngen Alps was beautiful in the midnight sun, with fog banks, lots of flowers, mirror-like fjords, the moon, and even a rainbow! Ohh how I wished I had bought an extra camera battery… though I don’t think we would have made it home that night if I had 😉

It was a great trip, a nice experience trying a camper van, and above all discovering Sørøya. It’s a real hidden gem, with hardly any tourists knowing about it, but so incredibly beautiful… can recommend it to anyone! I hope we can come back one day too 🙂