Last Sunday was a stunning day and we decided to finally conquer Tromsdalstinden (aka the Beast), the mountain we can see from our flat (see here for the winter view). It’s 1238 m high, the climb is not very technical but quite long.

The first part goes through the valley, and climbs up through a pretty forest. You come out on a plateau where there are still some patches of snow:

The start of the steep bit! Quite tiring but doable. Sometimes we had to climb over fields of rocks, like you can see behind Paul, but a lot of the rocks are flat on the top so it was quite easy!

After that comes the ridge, it’s fine on one side but on the other side there’s quite big drops! I didn’t want to come to close to the edge 😉 On the right is the view from the top. We reached it after about 4.5 hours, we were a bit slow, mostly because of me hehe.

There were quite a lot of people relaxing on the top. There is a big cairn and you can sign a logbook. We met some nice people up there. The views are really amazing! It’s the highest mountain in the area so you can see very far in all directions. Very impressive! Paul brought his new binoculars, it was fun to use them up there. We were able to see our flat and lots of other places. We also saw a lemming!! That was really cool (though it didn’t have green hair haha), the other day we also saw an otter so we’ve been lucky with wildlife lately.

We went back the other way, which was supposed to be longer but less steep. I don’t really believe that claim though, it was still really steep and only slightly longer. The going was very tough as it was mostly one huge field of rocks and climbing down on them was a lot harder than going up. I often needed my hands. The views were still really good though, this is towards Ramsfjorden…

Before reaching the saddle, the path turns towards the valley with a steep climb down to the hanging valley below the mountain. It’s really pretty there, very green with many waterfalls and strange rock formations…

My muscles were getting really sore though and I was getting tired. The last bit was a bit of a nightmare for me as I was in a lot of pain by the end, and it was still a long way through the valley before reaching the car. We finally made it back at about 23:30, after over 11 hours of hiking! I now finally understand how coming down a mountain can be a lot harder than getting up… I was completely exhausted and now (3 days later) my muscles are still sore. According to Paul, I walk “like a cat with smartie tubes on his legs”… thanks!!

We took the gps with us and have been playing with the results, see below for our track on the map (it doesn’t match perfectly in all places but that’s mostly our lack of skills with importing gps tracks on maps!) Click to enlarge… 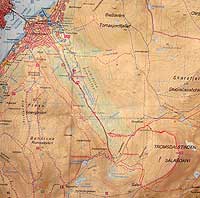 And here’s a profile of the mountain against distance. According to the gps we hiked 13 km so I am not sure why it says 20 km on this profile, but still a cool plot!

It feels good looking at the mountain now knowing we have been up there! We plan to do some more mountain climbing if the weather stays good. But first I need to recover from this one 😉

Everything is going well here, we’ve had very sunny weather. We’ve also found a new flat! It’s very different from the one we have now – it’s a loft flat in an old wooden house very close to the city centre. It still has quite a good view 🙂 and a tiny balcony in the bedroom. We’re going there this evening to sign the contract. We’re not quite sure when we can move in yet, but we’re very happy to have found something! It wasn’t easy, as there were many people looking for flats at this time a year (students etc). Sometimes we called for an add that was only 2-3 hours old and it was already gone!