In an article about original places to have dinner in the Netherlands, I read about Zomerlicht (Summer Light): a pop up restaurant / event on the island of Pampus, just outside Amsterdam. I’ve always wanted to visit Pampus (I’m an island girl!) so this sounded like a really fun opportunity. We were told to meet up at 19:00 in the harbour of IJburg, from where partyboat Sailboa would take us to Pampus. 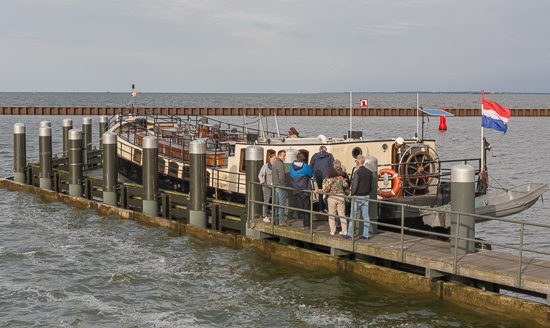 On board, we were all given a big key with a number, this was their way to keep track of drinks for each couple/group. Already on board, you could start your trip with a drink…

It had been a rainy day, but the clouds started to clear. I loved the views while coming in to the jetty at Pampus.

When we arrived at the island, we were welcomed by the host of the evening, who took us into the fort, through very colourful corridors. We were served a welcome drink (gin & tonic) in a very pink room. After that, they served delicious sweet potato and coconut soup, and then left us to explore the fort and the island by ourselves. 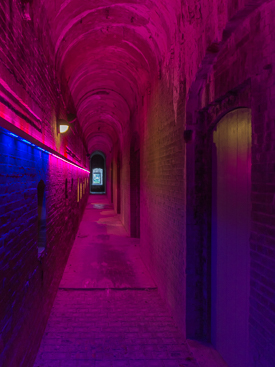 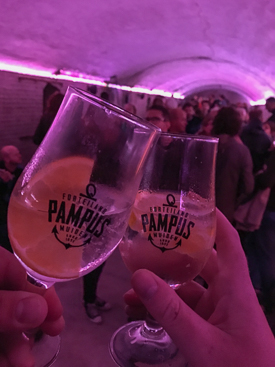 Pampus is an artificial island, built on a sandbank. This sandbank used to stop ships from coming in to the harbour of Amsterdam until the tide was high enough to pass. There’s a famous Dutch saying “Voor Pampus liggen” or “Laying for Pampus” which means lying down knocked out, which stems from the ships having to wait. They started building the island and the fort in 1887, and although there were 200 soldiers stationed on the island during World War I, it never saw any action. When the Afsluitdijk (Closure Dike) cut off the IJsselmeer from the open sea, Pampus lost its strategic position and it was abandoned soon after. 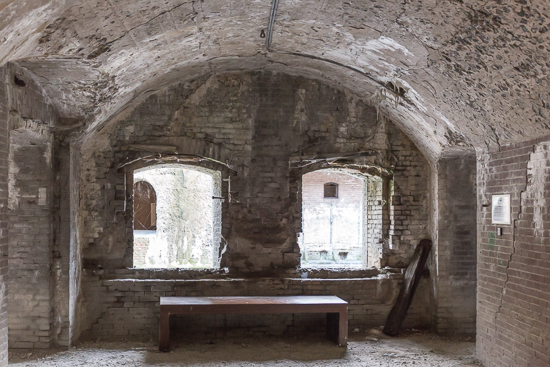 Especially for Zomerlicht, the fort was lit beautifully. It was a lot of fun to walk around the corridors while they kept changing colours, and exploring all the rooms. 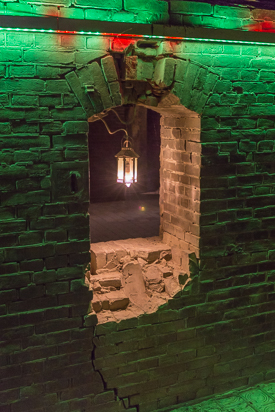 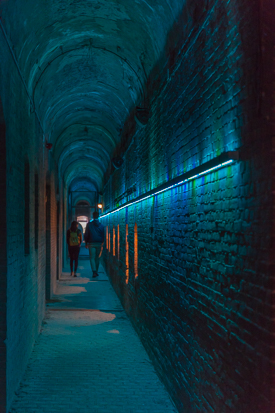 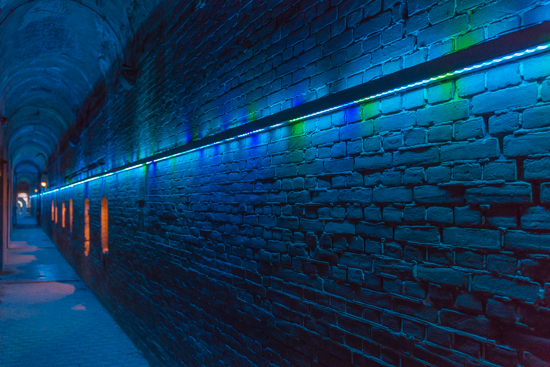 And the colours really changed to all colours of the rainbow…

Outside the fort, but inside the outer walls, was a photo exhibition of all the other forts in the defence line of Amsterdam. 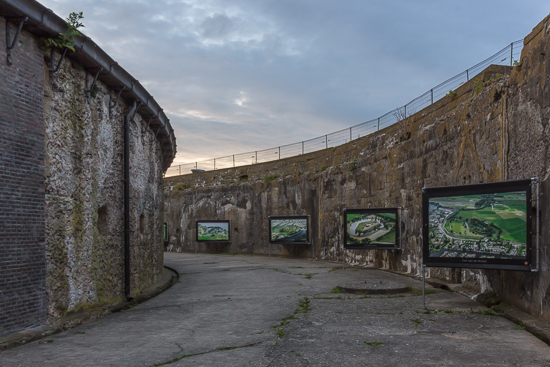 We climbed on the wall surrounding the fort, to get a good overview of the building: 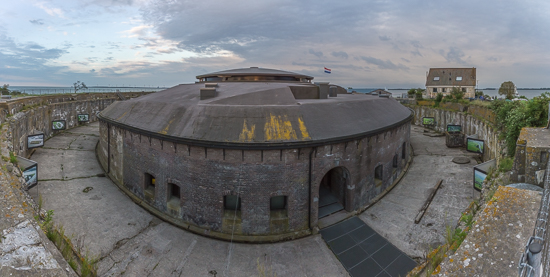 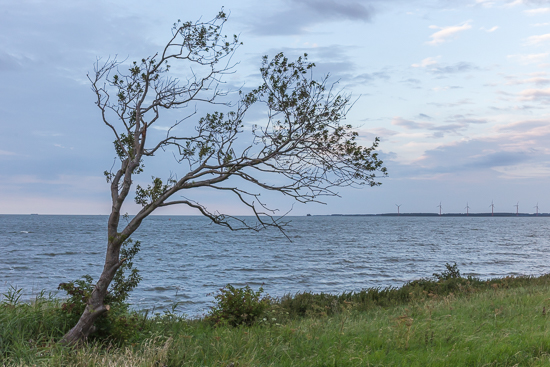 Until our stomachs told us to go to the restaurant area. Here they had set up food stands where you could get different dishes – here the mussel spaghetti. Michiel had a very nice selection of different fish. There was bread and dips, and cheese plates to go with it. 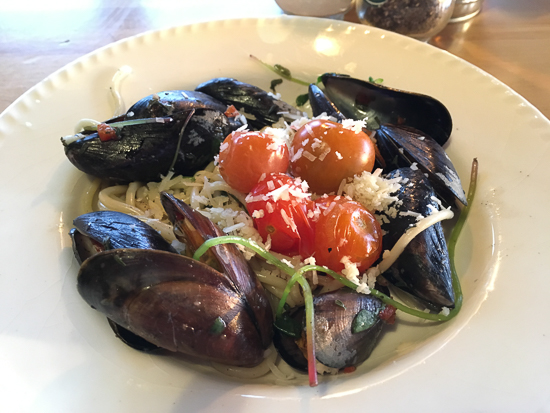 This was our view during dinner, I just had to walk outside and take a quick photo of the sunset. A group of volunteers were camping next to this house, they were staying there for a week and were working on renovation of the island. 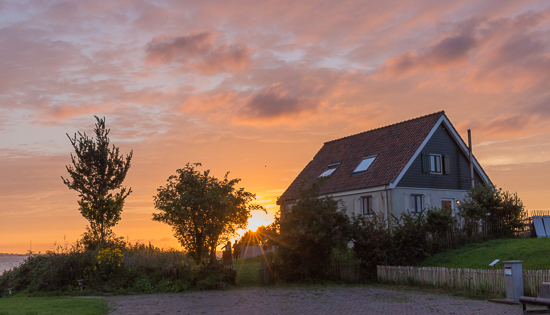 After finishing our first course, we went for a sunset walk. This almost looks like it was taken from a tropical island instead of a fort island outside Amsterdam 😉 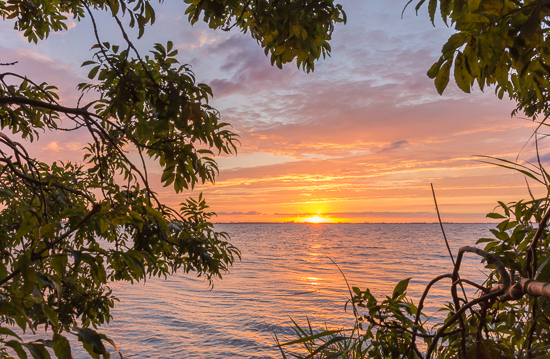 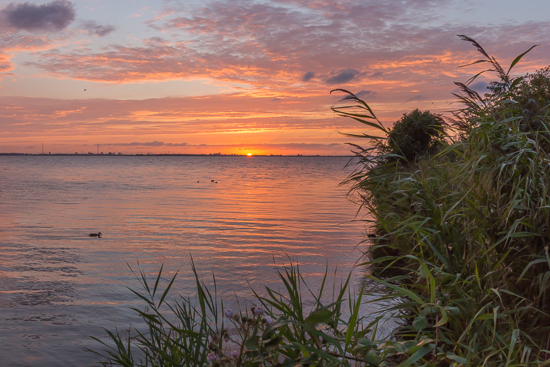 Peaceful views from the jetty… 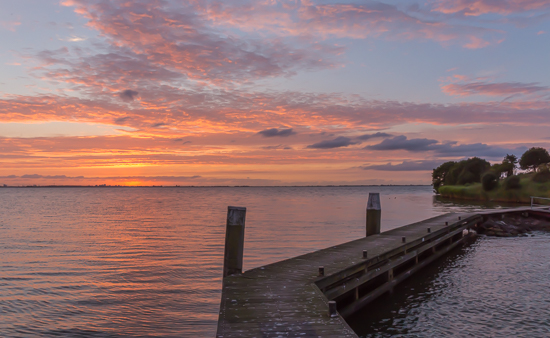 A panorama showing the jetty, with on the right the Sailboa and behind it the restaurant where the dinner took place.

When it got dark, we saw all the city lights of Amsterdam on the horizon: a pretty sight!

They lit a couple of campfires and the atmosphere was really nice. There were lots of different places to sit and enjoy your meal. We had another course of meat and potatoes, which was really tasty. The only downside was that the organization was slightly chaotic and at times there were long lines for the food. Luckily the food was worth the wait! 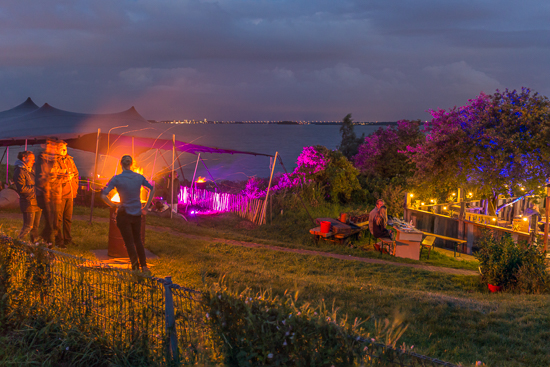 The view from the top of the island – a magical evening! Around 22:00, dessert was served, as well as tea and coffee with really good chocolate. 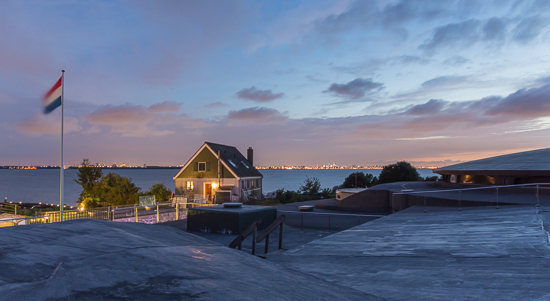 At 23:00 we all boarded the Sailboa for the journey back to IJburg. What a wonderful night!

Zomerlicht is taking place each Thursday, Friday and Saturday until 02 September, and there are still tickets available for most nights. Much recommended! Tickets costs €57.50 and include the boat transfer, dinner and a welcome drink. Check the website of Zomerlicht (only in Dutch…) for more information and tickets.

If you just want to visit the island of Pampus, it’s open daily except mondays until the end of October. For regular visits, the boat leaves from Muiden, and a return ticket plus entrance to the island costs €17.50. For more information, check their website. If you’d rather leave from Amsterdam, you can do so by using Amsterdam Tourist Ferry which leaves daily at 11, and a return plus entrance to the island costs €20. This is the same company that runs the Sailboa ferry that we took to Zomerlicht.