Today (ascension day) is a day off in Norway. After a period with cold and grey and rainy weather, it seemed spring arrived overnight yesterday – nice warm sunshine :). So we decided to go for a hike in the forest today.

We took the tbane to Frognerseteren with lots of other people with the same idea. We chose a small path away from the main dirt road, and we soon had the forest to ourselves. It was a beautiful hike, with lots of spring flowers. There were still some patches of snow left, and at times the path was muddy and wet, but it was never a problem.

After 8 km and just over 2 hours of walking we reached our destination: Kobberhaughytta. We were sure the cafe would be open, but it wasn’t. So we just had our sandwiches on the jetty near the cabin :).

We were really craving waffles though, so we had a look at the map and decided to head to Finnerud. We checked their website to make sure they were open and that they served waffles – and with renewed energy we started the short walk to this cabin.

This path was covered with the last remaining snow, but never mind – we covered the 2 km to Finnerud in record time: waffles calling! 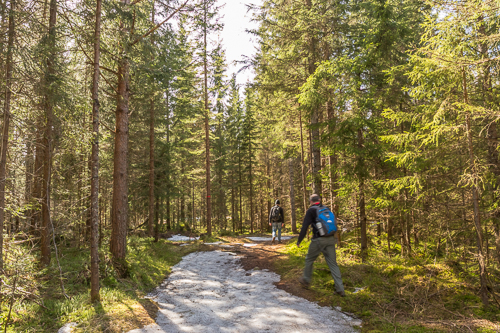 Some strange dangers in the middle of the forest…

We made it to the cabin, it was still open and full of expectation we entered. Only to find they had “sold out” of waffles, as so many people had visited that day. This is so typical Norwegian to me, they have a golden opportunity to make money (a bank holiday which is the first sunny and warm day in a while, is it so hard to guess you will have a lot of visitors?!) but they aren’t prepared. Oh well 😀 they had some other tasty snacks so we still had a nice break in the sunshine. 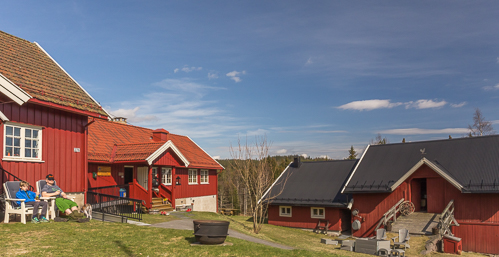 Afterwards we hiked the gravel road down to Sørkedalen, where there was a shop selling ice cream (yay!) which we ate enjoying the view over the countryside, while waiting for the bus back to the city.

We hiked nearly 14 km – a great day! And I hiked in a tshirt and needed sunscreen – it almost felt like summer 😀