It’s been really cold in Oslo (down to -13) and a couple of days ago, a really cool optical phenomenon was visible: light pillars. Some people thought they were seeing the northern lights, as the pillars were quite strong and very colourful, but this is a different phenomenon where city lights are reflected by tiny ice crystals in the sky.

I thought of going to a viewpoint over the city, but as it was really cold, I decided to stay closer to home (lazy…) and take some photos in the park surrounding the palace. They were making fake snow in front of the palace, as they also do at several ski areas around the city – this might actually be the source of the ice crystals floating around. 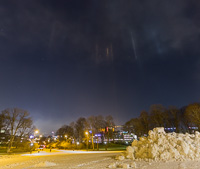 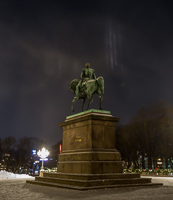 The guards at the palace came to ask me what I was doing – not sure they were really suspicious or they just wanted a walk/talk 😉 but they let me continue even if they probably thought I was a little crazy.

My photos made one of the biggest newspapers in Norway, they were used in an article by VG. Yr also wrote an article about this and other cold weather phenomena. Those are both in Norwegian, here is a short article in English.