It’s more than 6 months ago that I hiked the Alpine Pass Route. I’ve been planning to write a detailed blog post about the journey, but that is very time consuming (I’m a perfectionist when it comes to trip reports) so I never got around to it. Today I was looking through the photos, thinking it was such a waste that they’re only on my computer where nobody gets to see them, and that I should at least share some of them 🙂

This map shows the route, diagonally through Switzerland: 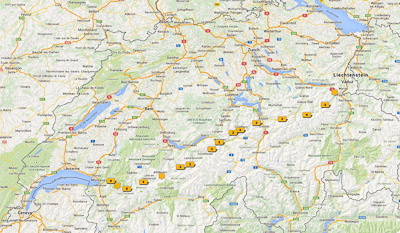 A short summary of the hike: I followed the route from the Cicerone Guide by Kev Reynolds – a fantastic book that I can’t recommend enough. To save weight, I brought only the eBook on my iPhone which worked really well. I used booking.com to find accommodation, usually only a day in advance. I hiked the route during the last two weeks of July, and never had a problem finding accommodation last minute. The Alpine Pass Route makes a complete east to west traverse of Switzerland, it covers 326 km, and crosses 16 passes. It can be done in 15 days. According to one hotel owner, the summer of 2014 was “the worst summer since 1956” and I had quite a few bad-weather days where I had to improvise. In the end I used 16 days: I spent one day waiting for better weather, and I also skipped two hiking days by taking public transport (both due to bad weather) and changed the route slightly near Lenk. It was a FANTASTIC experience, such a beautiful route! It was tough at times – some days are over 30 km and that is a lot when you add the height differences and the muddy-cow-dung paths in the equation. I was hiking on my own, which was usually not a problem – Switzerland is so well organised, the quality of signposting and the hiking paths is excellent.

Day 1: Very sunny, a beautiful day to start (very hot though). This is looking back to Sargans where I started that morning.

Day 2: Leaving the cheese farm in Vorsiez where I spent the night (amazing experience!), another beautiful, hot day.

Climbing up to the Foopass.

The first pass, the Foopass at 2223 m. Reaching a pass is wonderful, you suddenly have a totally different view into the next valley. The descend to Elm was long and exhausting, and I only just about reached the hotel before a thunderstorm arrived.

Day 3: cloudy but mostly dry. I hardly met anyone that day.

View from an unnamed saddle towards the Wichlenmatt Basin, with the Richetlipass in the distance.

The Richetlipass, 2261 m. Another tough descent was waiting, more than 1700 m down to Linthal.

Day 4: rain and low clouds, so I took the bus over the Klausenpasss (1948 m). It didn’t look quite so bad there, so I hopped off the bus and hiked to Unterschächen. A very beautiful area that I’d love to return to in better weather!

Ascending to the fairy tale village of Äsch. 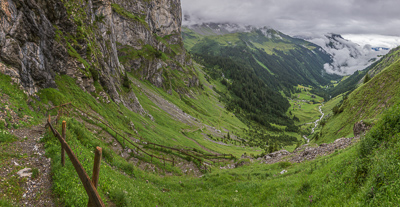 I took a bus to my hotel in Seedorf. On day 5 all I did was walk to Attinghausen, where I took the cable car to Brüsti and spent the night at a mountain hostel there. It was raining heavily in the valley, and it was foggy higher up, but on day 6 the fog cleared away 🙂 Yay, sunshine! 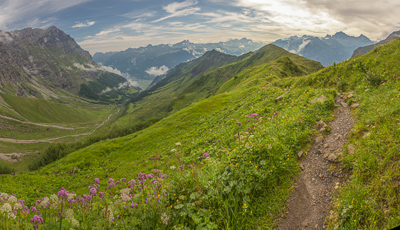 The hike from Brüsti to Engelberg was amazing, my favourite of the whole route. Beautiful views everywhere… 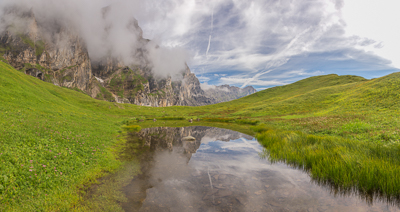 The Surenenpass (2291 m), with two guys who were helping watch the cows. They showed me a large group of ibexes through their binoculars, they were on a ridge just above the pass – amazing!

Day 7: I woke up to a heavy thunderstorm. I waited for the weather to calm down a bit, and took the cable car up to the Jochpass. The guy selling me the ticket thought I was crazy for going up there in that weather 😉 This is looking down towards Engelberg 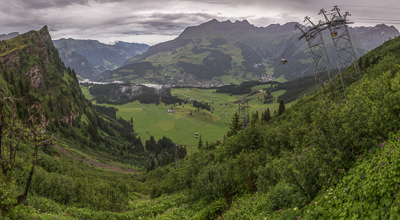 And just to show that not every mountain pass is scenic, this is the Jochpass (2207 m) – basically a sad construction site 😉

The weather improved a lot after I passed Engstlenalp. 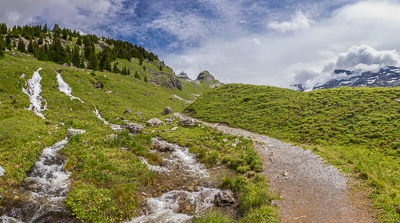 Looking back towards the Jochpass. 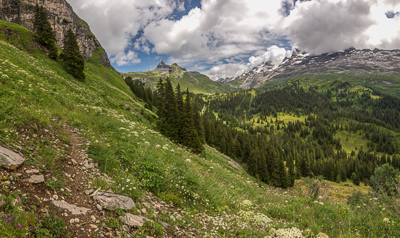 Beautiful views! Towards the end of the day, thunderstorms were treatening again, but I reached the cable car station at Reuti just in time. I spent the night in Meiringen. 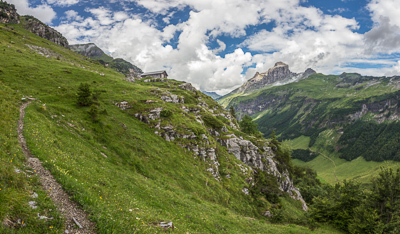 Day 8: my second-favourite day, hiking from Meiringen to Grindelwald – a beautiful and relatively easy hike. 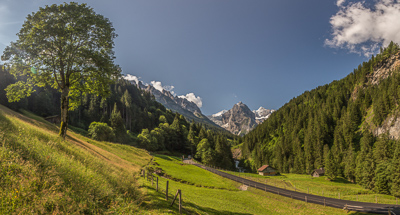 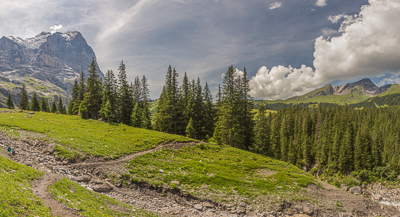 Instead of descending to Grindelwald, I took the balcony path to First.

With beautiful views of the Wetterhorn 🙂 I spent the night in the mountain hostel at the gondola station, best view ever and great food! 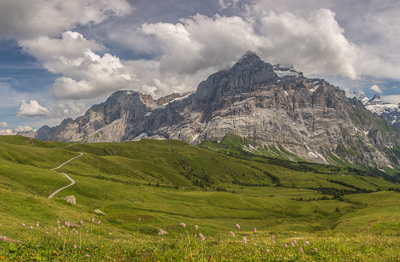 Day 9, heavy rain again. I took the cable car down to Grindelwald, spent some time in the tourist office trying to work out what to do. In the end I admitted defeat, and I took the train to Lauterbrunnen, skipping a stage. The weather was still bad on day 10, but I took the cable car to Mürren and hoped for the best. It was mostly dry, but I walked in the clouds a lot that day.

I stopped for soup at the Rotstock cabin, before continuing my way to the pass. 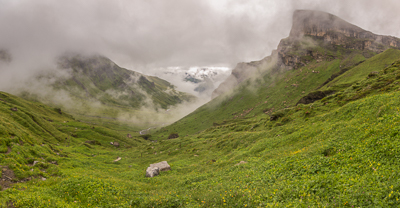 The Sefinenfurke (2612 m), with no views at all. The descent from here is quite scary, with cables and steps and finally a slope full of loose shale/small rocks. I was glad there were quite a few other hikers around that day, so I had company at times. I spent the night in quite a special place in Griesalp, a small hotel with shared bathrooms, and no electricity in the rooms, but a 3 course dinner was included and there were alpaca’s next to the hotel 😀

Day 11 started sunny. A tough but beautiful climb to the next pass.

The Hohtürli (2778 m), the highest point on the whole route. The Dutch couple who I met in the hotel were waiting for me at the pass, and we walked down to Kandersteg together.

Looking towards the beautiful Oeschinensee. Not long after, it started to rain, and we were glad there was a cable car for the last bit 🙂

Day 12, rain again. There were flood warnings out and there were placing sandbags in the village. It didn’t take much convincing by Marien and Ireen to join them by bus to Adelboden and from there by cable car to Engstligenalp where they had a hotel booked. They had a room for me too, and in the afternoon we walked around the plateau – a beautiful place!

Day 13: rain, but I decided to hike to Lenk anyway. This is where I didn’t follow the book, but I ended up in the same place. To be honest, it was a miserable day. Seven hours in nonstop rain, without meeting anyone. The descent from the Ammertenpass (2443 m) was quite scary, I was very happy with the hiking pole that the Dutch couple let me borrow. Looking back at it, I shouldn’t have hiked that day – at least not alone.

Day 14: Fog. Sigh. I took the cable car to Leiterli, also because I wanted to see the “exciting tight-rope path among a mass of mini-(limestone)-craters” – which was very cool indeed!

The Trüttlisberg Pass (2038 m) was not the most exciting pass 😉

Luckily, the weather improved 🙂 I descended to Lauenen, and from there it was another climb to the Krinnen Pass (1659 m) and finally pretty Gsteig, where I stayed in a beautiful old hotel.

Beautiful views towards the Seeberg farm and the Arnensee below!

The wall is the boundary between Bern and Vaud, which meant I would be in French-speaking territory from now on.

Thunderstorms were forming in the afternoon. I was very tired by the end of the day, and a kind gentleman gave me a lift for the last couple of kilometers to Col des Mosses – much appreciated! It was August 1, the Swiss national day, and I watched the fireworks and campfire near the hotel, before collapsing quite early.

Day 16: I happily accepted an offer by the hotel owner to drop me 5 km along the road, which saved me an hour of relatively boring walking. The first part of the hike followed the shores of the artificial Lac d’Hongrin.

Ascending to the final pass. It was very muddy here, and I fell over twice, getting quite frustrated. 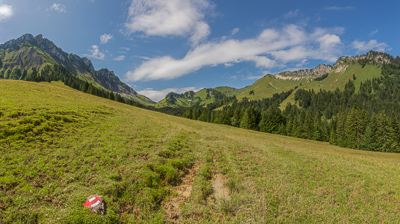 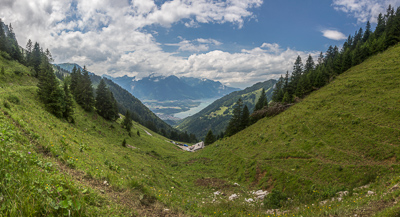 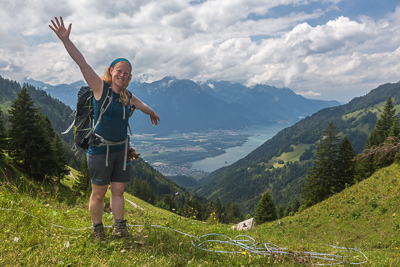 What a journey! It was my first long-distance hiking trip, and I loved it 🙂

8 thoughts on “Across Switzerland in 45 Panoramas”