The weather was calm and cold before Christmas. Then we were hit by several polar lows, which made my shifts at work very hectic and tiring, and we got LOTS of snow.

Either of this weather types would have been nice enough for a visitor, but Célia was really unlucky for the 5 days she was here: the temperature changed to +5 and we got lots of rain, which first gave streets full of slush before they turned into ice rinks. On the first evening she was here it was still mostly snow though, and we went to the beach where we took some moody photos…

The yellow light was caused by the clouds reflecting the city lights, it was quite spooky! 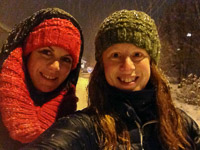 We had planned to take the cable car up on New Year’s Eve and watch the fireworks from there. The heavy rain that was forecasted spoiled our plans, but luckily we were invited to a nice party at Nick and Penny’s 🙂 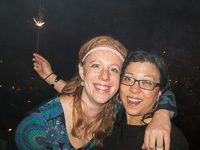 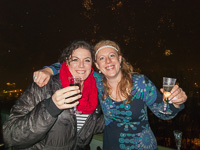 It was raining so much the sparkles hardly wanted to burn, but we still had a nice view of the fireworks from the balcony. Going home, we all changed into more sensible footwear – partying Tromsø-style 😉 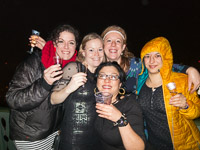 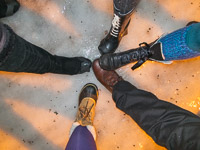