September is my favourite month in Tromsø 🙂 There is something about the crisp freshness of the air, the yellow autumn colours, the sky glowing red long after sunset and the return of the aurora that always makes me very happy. When I woke up (after a night shift) to a beautiful sunny day, I very quickly decided to do something I had dreamt of for a long time: a solo camping trip. (Paul is at sea again, otherwise he would have been more than welcome to join 😀 but I actually wanted to see if I could do this by myself).

Anyway… I woke up at 14:30, and by 16:00 I was fully packed and on my way 😀 My bag weighed 20 kg, mainly because I dragged my very sturdy tripod up the mountain 😉 I decided to go up Smørstabben/Bruna, at Grøtfjorden. It looked like a nice grassy plateau on the top, and it wasn’t too extreme a hike as you can park at 160 m. It was a slow and sweaty affair to climb the ridge up to 500 m, but I made it 🙂 and the views were SO worth it…

I walked around for a bit, trying to find a place to pitch the tent. There were plenty of nice places, but I also wanted the tent to feature in my photos, so I had to think composition as well as grassy/flat/dry 😉 Finally I found a nice grassy spot next to a little stream.

I had dinner – a baguette and potato salad, I didn’t want to make the bag even heaver by taking cooking equipment. After that I explored further up towards Bruna. I discovered where the little stream came from: a pretty lake 🙂 and I watched the sunset.

I enjoyed the view from Bruna – straight down to Storvatnet, I could see my car way below 🙂 I continued to Brattfjellet, another top on the plateau.

I returned to my tent and waited for darkness to fall. The sky was glowing orange on the horizon, and I kept taking photos – it was so pretty! At some point some clouds rolled in, and the stars came out… The northern lights never made an appearance, but I didn’t really mind. I did stay up for a long time, listening to an audio book in the tent – a surreal experience to hear Julian Barnes soothing voice while completely alone on a mountain top 🙂

It had been quite a warm day, but I found it cold sleeping in the tent. And worst of all, at 06:30 I woke up to RAIN. Which wasn’t forecasted at all, and I had so much faith in the forecast that I hadn’t brought any waterproof clothes. Oops. I just went back to sleep, hoping it would pass. I woke up again at 9, and luckily it was dry by then. The views were so different in cloudy weather, with fog rolling in from the sea.

I walked in and out of the fog on my way down. These two photos below are taken less than a minute apart 😀 the views kept changing, it was really fascinating.

The last part of the hike goes through a forest. Here I passed a mountain stream near a cabin, just before I got back to the car. 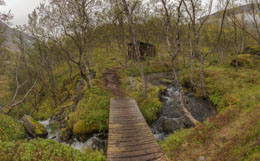 I was quite tired after this trip – from not sleeping so well in the tent, and from a sore back and shoulders from carrying so much weight. I was very proud of going on this solo camping trip though 🙂 and worth all the sweat and pain! Next time, I might try to convince Paul to  carry half my stuff join me on a beautiful trip 😉