After our week of cycling, we booked a cabin at the northern end of Finnish Lakeland. For those familiar with the area, it was near the village of Korpijärvi (between Varpaisjärvi and Rautavaara, about 80 km north of Kuopio). We had the cabin for a whole week, and it was the best week ever… The cabin came with a large sauna and its own rowing boat. During the whole week, we used the car once – to go food shopping in Varpaisjärvi. The rest of the time we cycled, we walked, we rowed, we swam… 🙂
Here are two photos to give you an impression of the cabin…

On the first day we cycled around the Korpinen lake, and quiet forest roads. We found a nice jetty to have a break, and a dragonfly kept us company 🙂

In the evening we tried the rowing boat. It took some practice before we could row in straight lines instead of zigzags, but we mastered it by the end of the week 😉 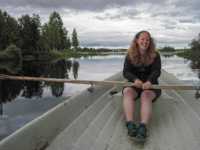 In the evening it cleared up, and the small lake in front of our cabin turned into a painting, reflecting the sky….

The next day we cycled to Älänne, a small nature reserve only 5 km from our cabin. There, we hiked one of the trails through the forests and on the shores of the lake. It was beautiful!

There were lots of big sandy beaches on the lake, and at the end of the trail there was a nice shelter where we made a campfire. Funny story: during our hike I accidentally stepped next to one of the boardwalks, into a marsh. I got my shoe and sock pretty wet, and Paul offered to dry them on the campfire. I kept asking him if they were safe, if they were not too close to the fire etc… but in the end I relaxed and just enjoyed our break. When we wanted to leave, I found out my sock was half burnt away and the shoe was smouldering from inside the sole… OOPS!!

The next day was our first day of sunshine 🙂 and we decided to explore the winding river that feeds into the lake. Metallic blue/green dragonflies darted around the river, we had fun chasing them in the hope of a good photo 😉

The water lilies were very pretty as well!

In the evening I took some sunset photos in the field behind the cabin, and then the full moon rose over the lake…

Wednesday was another sunny day, and we explored the large lake and another river by boat. We cheated this time, and put our engine on the boat 😀 (we had our inflatable zodiac with us).

The sunset was so beautiful, everything was blue and pink, the lake was a perfect mirror, and the moon rose on the far side….

We went for a row in the boat in the moonlight, while patches of fog drifted from the fields over the lake. A magical evening!

On Thursday we went back to Älänne to try one of the other hiking trails. It had looked boring on the map, but it was a fantastic hike 🙂 The best part was when we crossed a ridge between two lakes – so pretty! 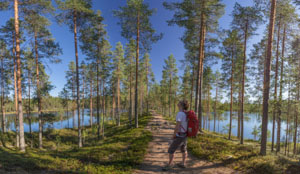 We stopped halfway to have dinner and a campfire at another shelter. We found out afterwards that it’s not wise to stay in the forest after sunset, as the mosquitos come out in full force… So we hiked back in record speed, and enjoyed cycling back along the deserted roads….

And then sadly, our last day at the cabin arrived. It was another warm sunny day, and we spent it picnicking in the boat and swimming in the lake. In the evening we made dinner outside, and enjoyed this sunset view…

We had another sauna and a magical swim in the lake after midnight. Behind the cabin there was a nice display of noctilucent clouds, while the moon lit a shallow layer of mist over ‘our’ lake. Another magical night…

It was very hard to say goodbye to the cabin the next day, but it was time to leave for our final destination in Finland. To be continued 🙂