Finally, the last part of my trip through Switzerland – more than a month after I came back :D.

We had a nice and relaxed train journey from Interlaken to Zermatt. The weather had changed completely, it was sunny and very warm. Our hotel in Zermatt was wonderful, we were warmly welcomed with a nice drink and we had  a beautiful room (with decorated wooden ceiling panels) with a perfect view of the Matterhorn.

The last time I was in Zermatt was Christmas 2006, when I went skiing with Paul (see here). It was fun to recognise places in a totally different season 😀

We went for a short walk just out of Zermatt, but it was really warm (28 degrees) so we quickly abandoned our uphill path and didn’t venture very far. Zermatt is car-free, but there are lots of electric vehicles buzzing around, most of them owned by the hotels. The small town is almost entirely based on tourism. It’s also a real mountaineering base, of course for the Matterhorn but there are many other mountains over 4000 m around Zermatt. I took lots of photos of the Matterhorn, it’s such an iconic mountain 🙂 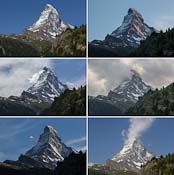 The next day we took the Gornergratbahn which goes up to 3089 m. This time we had no issues at all with the altitude, Zermatt itself is at 1600 m so we must have become accustomed. My dad managed to walk into a glass panel though – thinking it was an open door – so perhaps he was still kind of influenced by the altitude 😉 Luckily this time we actually had a good view from the top!

It was quite a circus at the top station, everybody was posing for pictures in front of the Matterhorn, and in addition there was a professional photographer with a St Bernard dog… He had a Japanese assistant (very clever), who would hold a cardboard shield in front of any camera that was illegally taking a photo of the St Bernard portraits 😀 It was quite fun to watch all this 😉

I love people-watching, playing “guess the nationality” and secretly taking photos of all the silly tourists 😉

Including my dad of course, hehe.

There is a hotel/restaurant/observatory at the top, and great views of the Gorner Glacier.

,
Some more views of the glacier…

After a lot of searching, we finally spotted the new Monte Rosa Hut! It opened in 2010 and looks fantastic, a really modern building, with solar panels and its own water system. Inside it’s all wood 🙂 I’d really love to visit! You have to cross the glacier to get there though, so I’ll have to find out how difficult this is.

After enjoying the view (and the free wifi :D) we took the train back to Zermatt, but got out at the Riffelalp station, which is situated at 2200 m. We walked from there to Sunnega, 7.5 km away and only about 100 m higher. Though as my dad will stress: we went up and down a lot, so the height difference of “only” 100 m is a bit misleading 😉

It was a beautiful hike. The first part went through the forest, with lots of hollow trees. We also found some words of wisdom on a bench 🙂

My dad kept saying he felt like he was walking around in a model-train landscape, and sometimes it really does look exactly like that!

About halfway we came passed a restaurant, a very welcome break. My dad had tomato soup and I had a pancake with warm cherries and ice cream, mmmmmm… 🙂

At some point we crossed a river that comes from the glacier. In some of the nearby shallow (and still) pools, we found lots of tadpoles!

The Grindjisee – famous for its reflections of the Matterhorn, but it was getting cloudier and the reflections weren’t very spectacular.

A break between the flowers 🙂 and a very pretty lake further down.

My dad was not so keen on the last part of the hike, where you had a relatively steep drop next to the narrow part. I didn’t even pay attention to it, but he was very relieved to reach the end of that path 😀 A little while later we reached Sunnega, from where we took an underground funicular railway back to Zermatt. What a nice day!

The next morning it was time for a classic train trip: the Glacier Express from Zermatt to St. Moritz. A very beautiful train with big windows 🙂

It takes 7.5 hours and there is a lot to see on the way – spectacular bridges and loops, high passes… We really enjoyed it! Most people in our first class compartment were having lunch served at their place, but we only ordered a big piece of chocolate cake (we had brought our own lunch). The only down side of the Glacier Express is that none of the windows opens, with made it very hot at some point, and it also caused reflections in all the photos I took. The next day we backtracked along the most spectacular part on a regional train where the windows did open, so I got better photos the next day 🙂 These two photos show the famous Landwasser viaduct, which is 65 m high!

We got to St. Moritz in the early evening, but we were surprised to find that everything (shops, supermarkets) etc had already closed. Oh well. The next morning we got up early and started our journey back to the Netherlands. I had been a bit scared about this last day, as it was going to be a 15 hour journey, but the views were so beautiful that time passed very quickly.

Our trip went like clockwork all the way until the Dutch border – there we were thrown out of our train because of “technical problems” and we had to continue by regional trains with a few changes. We finally made it back home at midnight…

What a journey! I enjoyed this week in Switzerland a LOT and I am so happy my dad and I had the opportunity to go on this trip. I also rediscovered how much I love Switzerland, and I hope to come back soon 🙂