We got back from a 6 day Easter trip to Luleå last Monday. We drove more than 1500 km! Below is a map of the trip (click to enlarge). I have added some of the place names along the way. We did not drive to Luleå in one day, on the way there we stopped overnight at Gällivare, and on the way back in Muodoslompolo. 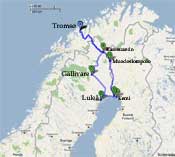 We left on a very sunny day, but as soon as we reached the mountains near the border with Finland it started to get cloudy and quite gray. The road there is endless and you can often see for miles! We saw some large herds of reindeer. We stopped for a break at Karesuando, on the border between Finland and Sweden. They had one of those signs giving the distances to random places in the world 🙂

We walked onto the frozen river which is the border and also a snowscooter highway. Under the bridge there was an area of clear ice, which looked amazing! Here is Paul standing underneath the bridge…

And here are some photos of the ice! The ice was really thick and very clear (almost like glass), it was almost unreal to stand on it and be able to look down and see the thickness and the cracks in the ice!

After the stop in Karesuando, we drove straight to Gällivare. We stopped for the night at Gällivare Camping where we had rented this cosy cabin:

The next day we only had a short drive to Luleå, about 3 hours. (It’s funny how you get used to long distances, I used to think a 3 hour drive was very long) We stopped in Överkalix, where we found a very nice bakery selling amazing cakes!! There was also a hardware shop selling mostly ice drills and other stuff for ice fishing.

We got to Luleå quite early. We had found a very nice deal at a hotel right in the city centre, Luleå Stadshotellet. I think that the Swedes (like the Norwegians) all prefer to stay in huts over Easter so hotels don’t get much business. The hotel was really nice, quite luxury but relaxed (and such a great breakfast buffet that I hardly needed any food for the rest of the day, hehe). It even had an English pub, so we had a burger and a pint for the first time in ages!

In the afternoon we walked around the skating rink. Luleå is a harbour town on the Gulf of Bothnia which freezes in winter. They make a long skating rink (about 7 km) circling the city centre. With the bad weather, they hadn’t cleared the snow off though, so nobody was skating but it was nice for a walk. We found some signs saying no cars or motorcycles allowed (in the middle of the harbour!) and also a buoy…

The next day we went on an exciting trip: driving the ice roads over the frozen Gulf of Bothnia! The sea ice is strong enough to support cars, so every year a few (official) roads are opened on the ice, connecting the mainland to some of the islands in the archipelago. Paul has been fascinated by this for a long time, and this was the reason for our trip :). Below is a map of the ice roads, we drove all of them except the one to Storbrandon. Enlarge the image to have a better look – it’s hard to read the scale on the bottom left but it indicates 2 km.

On the first day we drove to Hindersön island. It was scary at first to drive onto the ice, but the roads are very wide and easy to drive on. It was snowing heavily, so there was hardly any contrast between the road and the sky, it was all just very white! The TomTom didn’t seem to mind us driving on the sea 😉 These photos are actually taken on the way back when visibility was better, except for the first one with the big sign on a sledge. This was at the junction of the ice road – also note the Easter tree behind the signs!

We drove to Jopikgården on Hindersön island (see the map), from where we continued on skis to visit some other islands. The first one was about 3km away, and the second one another 3km from the first one. Skiing through the endless white was a strange experience. The skiing is very easy as it’s all flat, but it still took us about an hour to reach the first island!

This panorama shows how when the clouds reflect the surface underneath, you get very dark clouds over the islands! They can really look like rain clouds, and at first I didn’t realize what was going on, but Paul told me that on his cruises that’s how they know where there are areas of open water – the clouds above will be much darker. How cool!

Here are some photos of our ski trip that day. Close to the islands, you get the ice breaking up and forming interesting formations. Further out at sea there’s actually an ice front that can be up to 8 metres high! Unfortunately that was too far for us, but we still found some cool formations around the islands 🙂

Just before we came back to Jopikgården where the car was parked, the sun finally came out!

The next day we decided to visite a town called Piteå, about an hours drive south of Luleå. It looked like a friendly town, but there wasn’t much to see or do there, so we didn’t stay very long.

After leaving Piteå, we decided to drive another ice road, this time to the island of Junkön. This island had a large reindeer herd living on it! We had to drive slowly, as many of them were close to the road. A great opportunity to get some photos 🙂

It had been misty all day and this had turned all the trees to a pretty white colour, it looked very wintry and cold (and I can tell you it felt very cold too!!). When we took a closer look at the trees, we saw that all the branches were all covered in ice on one side…

We went for a short ski tour, but we found that about half of the island was military practice ground and had big warning signs around it, so we didn’t get very far. We didn’t want to cross to other islands as it was quite late already and the visibility was really bad anyway. It was a nice little trip though. I was really cold at first, so I was wearing a face mask – only my eyes were exposed to the cold!

Coming back to the car, that we had parked next to the ice road. Paul took a photo of us driving back… don’t worry, it wasn’t dangerous, there was hardly anyone else on the road and we found that these roads are so flat that the car will keep driving in a straight line even if you let go of the steering wheel!

The photo below is taken just after we left the ice road. The trees were so beautiful!

The next day we left Luleå and started our way back to Tromsø.  But first we had to get some photos with the giant chicken family opposite the hotel… they were really funny!

We were looking forward to visiting the twin border towns Haparanda (Sweden) and Tornio (Finland), but were disappointed to find there was not much to see there. Mostly a lot of huge supermarkets and also an Ikea – the closest one to Tromsø in fact, but still about 600 km away ;).  We visited Kemi instead, a Finnish town nearby. It had the feel of a coastal place. The weather had finally turned sunny, but with the wind it was very cold. We went for a short walk on the frozen sea and looked around the town a bit.

And after the giant chickens, we found a giant bike too… Come to think of it, we also saw a giant chair. What is it with giant art here? 🙂

Even though it was Easter Sunday, all supermarkets were open, and we visited a giant one in Finland. We found a lot of curious things in there, like these donut-shaped water bottles (I still don’t see how that is useful, but maybe I am missing something), and all the sauna paraphernalia.

After that, we pretty much drove straight on to our accommodation (much) further north. Our arrival to Rajamaa was quite bizarre. We drove through the forest for hours until we got to our destination. We walked over to the main building to get the key of our cabin, opened the door and walked straight into a wedding party! The first person I saw when I opened the door was the bride – very bizarre! Lots of slightly drunk people but everyone was very friendly. We stayed in a very cute cabin, and the next morning we woke up to a beautiful sunny day… And the drip-drip-drip of snow melting 🙂

After packing the car we decided to go for a ski tour now that is was so sunny. We followed the river for a while – this is the river that forms the border between Finland and Sweden. It’s not very wide here and there are rapids. Because of this, the river doesn’t freeze completely and we couldn’t cross it. It was very beautiful though!

It was warm enough to ski without a jacket or gloves etc… Paul even skied in his tshirt!

After a while some clouds started coming in, a very pretty sky! Unfortunately it did eventually become overcast, but we made t

he most of the sunshine 🙂

After our ski trip we drove back all the way to Tromsø, which took about 5 hours. When we crossed the border from Finland into Norway, we were surprised to see a green landscape! Five days previous it had still all been white… The fjord where we have been ice fishing was bright blue from all the melt water and the ice had huge cracks in it – so no more ice fishing until next winter… It has been very warm in Norway over Easter, in Tromsø temperatures reached +10C! A lot of the snow has been melting and I was getting excited about Spring. Paul doesn’t agree with me, as he would like to keep skiing for some weeks longer. Lucky for him it has gotten colder again and we had some new snow. Still, the snow is slowly disappearing and the trees have buds so I just have to be a bit more patient, but Spring is definately on the way!

I’m not sure how often I’ll be writing in the coming weeks, I’m going to Norwich in 3 weeks for a symposium and a meeting (probably my last!!) with my supervisors. I have a lot to finish before then!

2 thoughts on “Easter in the Luleå Archipelago”