Highway 12 is called a Scenic Byway, and runs from Capitol Reef to Bryce Canyon National Park. We were planning to camp somewhere along the way after leaving Cathedral Valley. The road is claimed to be one of the most beautiful roads in the USA, and it’s clear to see why… the views are fantastic and the landscape changes a lot along the way.

The autumn colours were fantastic, a lot of the birch trees were a bright yellow colour.

The forest was so pretty…

Later on, the road goes over a narrow ridge, with steep drops to both sides. Unfortunately I didn’t get a good picture of that, but it was impressive. The landscape turned more desert-like again, and we saw a canyon from above.

Paul had been battling a cold for a couple of days now, and was tired after camping for the last 2 days. When I also started getting a cold, we decided we needed some more luxury that night, and we found a motel in Escalante. It turned out to be a very friendly town – full of outdoor shops, book shops and nice cafes – perfect!

The next day I wasn’t feeling well but Paul was lots better, so we decided he would hike to Calf Creek Falls, while I stayed in the shady picknick place next to the parking lot, reading a book. 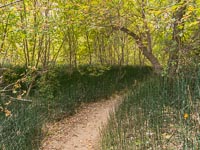 Here are the photos Paul took of the waterfall… looks really nice, I think on a healthier day I would have liked to swim in the lake underneath 🙂

Later that day we drove to the cabin we rented, between Bryce Canyon and Zion. Ready for more adventures 🙂