I’m sorry for the delay in getting new photos uploaded 🙂 Three weeks ago we went to the Netherlands – again! My aunt was turning 60 and my parents had organized a surprise party for her, so they asked us if we’d like to come. We only went for the weekend, flying on Friday evening (slaloming around the thunderstorms) and coming back on Sunday night.

On Saturday we went to the Hague to visit the Escher museum. First we walked around the Dutch government buildings:

The museum was in a palace, quite pretty! They had combined the Escher prints with some weird lighting made by an artist. I did like the shadows they made on the wall, but in some cases I thought the lights were too bizarre (a skull??) and didn’t really match with the palace or the museum. The museum was claiming to be an interactive experience rather than a traditional museum, but apart from the top floor (and the cloak room, see the first photo) I don’t think that was true. On the top floor, they did have some games to play, a room with distorted perspective (we had a photo taken where I appear a giant next to Paul, unfortunately their printer wasn’t working 🙁 ) and – the coolest thing – a virtual reality walk through Escher’s world! Anyway, here are some photos: 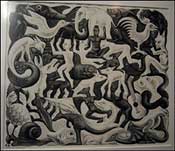 I did really like the museum, Escher was such a genius, I just love his work! After several hours in the museum we walked around The Hague for a while. There was some arty thing going on:

On Sunday, we all got up early and we left for the beach. My aunt was there with her friend Guusje, who was also turning 60 just 5 days later. Guusje is an amazing person, she also makes great art. They were staying in a beach house and thought they were hiding from everyone – hehe. My parents had bought a special cake, normally only for people who turn 50. In the Netherlands, when you turn 50, you are called “Sara” or “Abraham” and there are lots of traditions involved, this cake is one of them. My aunt managed to hide from everyone 10 years ago, so we made it a Sara+10 party! Paul was hypnotized by the cake 😉

These photos were taken on the way to the beach, I’ve never seen such big onion flowers! Very pretty.

We had some Dutch flags with us, and this is how we all walked to the beach house:

My sister had bought them these wind-up grannies, they were hilarious!!

Most of the morning was spent playing with them 🙂 they even made a board to race on!

My brother was brave enough to take a dive, even though the weather wasn’t very inviting. He didn’t stay in long 😉 Here he’s running back to the warm caravan with my sister and his girlfriend Kaya:

The part was a big success, everybody enjoyed it a lot! We took some group photos just before we left. The first one is all Luijting plus “aanhang” (Dutch for other halves, literally “followers” hehe). The second one all the old ones (hihi) – my parents on the left, Guusje in the middle, Marianne and Els on the right.

After the party, Bart, Kaya and Paul took us to a kind of festival in a mental hospital. Euh yeah that is quite crazy 🙂 They open their doors once a year and have a big festival with games, fun fair and people selling art. It’s a beautiful place! This one guy came up to me: Do you like polished nails? And before I knew it, I was asked to choose a color (Paul chose the most horrific pink possible!!) and he polished my nails. Not for money, just for fun… It was cute! It did end up everywhere so I was glad my mum had nail polish remover at home 😉

That’s all for now, I have many more photos, following soon… (really!)

2 thoughts on “The Netherlands (again!!)”